The Different Types of Studio Lights 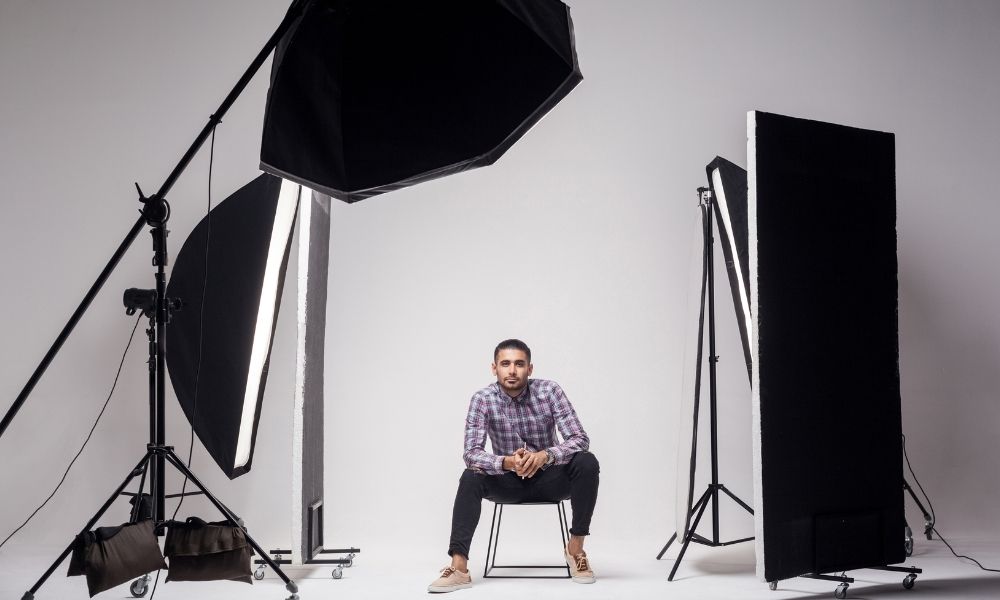 Setting up a professional studio for shooting video productions requires sufficient lighting. The quality of your lights can make or break the quality of your videos. There are many different ways to light a scene, depending on the purpose and the vision of a video.

To ensure you have the right equipment for every production, use this guide to learn the different types of studio lights. Although specific recommendations vary between productions, the equipment below is some of the most important gear you can have on set.

Terms such as “warm lighting” and “cool lighting” are common among professional video productions. So, how do you achieve warm or cool conditions in the camera frame? Well, you have to know the difference between tungsten, fluorescent, and LED lights.

Tungsten lights are widely known for their ability to create a warm glow in-frame. That being said, tungsten lights also have a reputation thanks to the safety hazards commonly associated with them. In the wrong hands, these lights can cause injuries or fires on set. If you’re using smart and safe handling practices, a tungsten light can be a great addition to your video production.

For shoots that call for a cooler image, seek out some high-quality fluorescent lights. Although you might not consider “cool” and “daylight” synonymous, fluorescent bulbs are great for capturing both. It’s understandable to assume that fluorescent lights mix poorly with daylight, but it is actually quite the contrary. When you’re trying to create the illusion of daylight in your frame, fluorescent bulbs will definitely help you do it.

Furthermore, since these bulbs are so cool in temperature that they pose less of a hazard than tungsten lights do. Sure, you can still hurt yourself via reckless handling practices, but safety hazards will be minimal as long as you’re responsible.

Finally, we’ll dive into the happy medium between the bulbs mentioned above—LED lights. When you’re using LED lights, you have more energy-efficiency and control. The control factor comes into play thanks to the adjustable nature of LEDs.

Whether you want a cool image or a warm one, LED lights will meet either requirement. Plus, the customization of LED lights can run deeper than that. This is why, at Ikan, we have a variety of professional LED studio lights available.

Having control over as many areas as possible is important for professional video productions. Adjusting light settings is only one part of the production you should have immense control over, but it’s one of the most important for bringing your vision to life. When the lighting style of a video doesn’t match the style or tone of the content, it becomes immediately apparent to everyone in the audience.

Roles You Should Fill

When it comes to the different types of studio lights, you have to think about the roles you’re looking to fill. By “roles,” we mean the functionality of individual lights within three-point lighting arrangements, four-point arrangements, and so forth. You might not use them all at once, but it’s always good to have this tech on-deck when shooting in the studio.

A key light is arguably the most important gear for setting up a specific lighting arrangement. Think of the key light as your central light, your number one light source that’s always going to provide some benefit to video images. This is because it’s the central source of illumination for the subject in the frame and a suitable means of creating shadows.

You can use key lights on their own or in tandem with other lights, depending on what you’re trying to shoot. The other light roles you fulfill going forward are all aiming to alter the shadows being cast by the key light in some way.

The role a fill light plays in your video production is right there in its name. This light source exists to fill in the shadows initially created by the key light. More specifically, it exists to restore the details swiftly lost due to the shadows being cast. With the help of a fill light, you can create an image with more detail.

This isn’t always what a video production will call for since your specific lighting arrangement relies on the atmosphere you’re trying to create. Nonetheless, it’s always beneficial to have fill lights in the studio for when you need a softer but warmer image in the frame.

Backlights, or “hair lights,” are sources of illumination you place behind the subject as part of a three-point set-up. After placing a backlight behind your subject, it forms a distinct outline around them, which separates them from the background.

In turn, it gives your image an immensely enhanced visual depth. Without a backlight, the image looks flatter. When you have one carefully placed on the set, that flat imagery is immediately removed. Additionally, it gives you a great method of focusing your audience’s attention on the subject. Poor lighting can cause disinterest in viewers, but good lighting can captivate your audience.

Although the previously mentioned roles are all crucial to a three-point lighting arrangement, there is another beneficial source of illumination. With the help of key, fill, and backlights, you create an image with depth and focus.

These lights pull the subject to the forefront in very effective ways. However, maybe you don’t want to lose the details in the background. For shoots that benefit from richer detail behind subjects, you can use the aptly titled “background light.”

In the same way that fill lights restore details lost by the key light, background lights restore details lost by the other equipment. Instead of allowing the area behind subjects to fall into shadow, background lights illuminate it to create a more visually interesting backdrop. That is, of course, if you make an effort to arrange a backdrop that’s worthy of illumination.