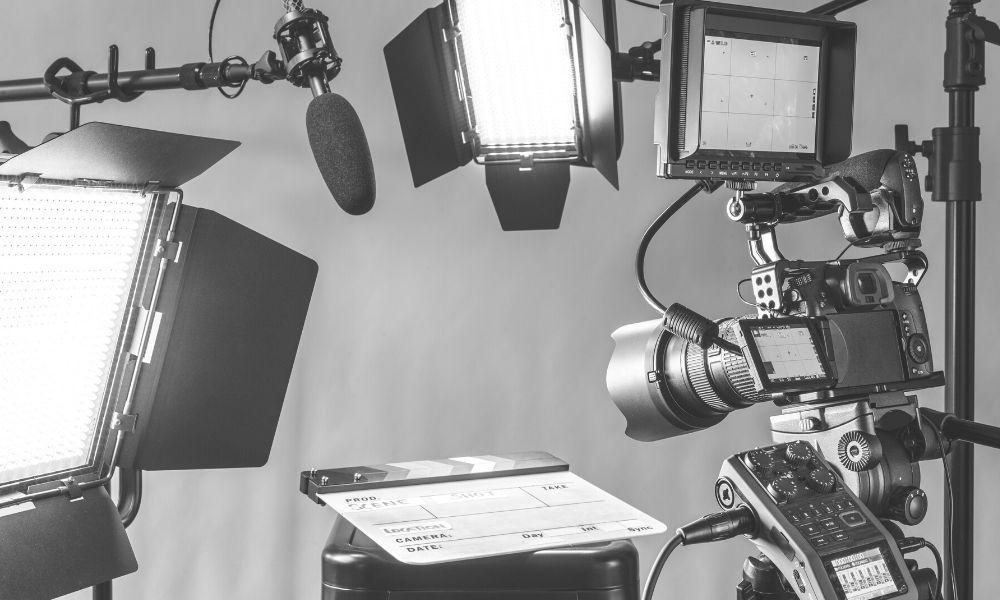 The field of video production has many different subsections within it that are crucial to a project’s lifeblood. Being ill-prepared with your production gear can significantly hinder your final project’s quality. By following an ultimate guide to video production equipment, you can discover gear integral to production that you may not know about.

As you probably know, using a camera lens in its default state is typically not the best for video production. It can certainly be useful, depending on the project, but the first things you should think about regarding camera equipment are proper lenses—especially proper filters.

The right lens filter can transform a mundane image into something special. It can make the wrong lighting look right or it can make a cloudy day look bright. If you’re going to be altering your lens, don’t forget that you’ll need the assistance of lens adapters. They are another integral piece that brings your vision to fruition.

If you want to achieve smooth camera movement in your footage, gimbals can help. Gimbals can come in small sizes, but if you need a larger gimbal for high-quality cameras, you can find a gimbal for those too. The difference between a stabilized shot and a shaky shot is astronomical once you see the finished products.

This is another device used to stabilize cameras, but it also has unique benefits. If you don’t want any motion in your image, a tripod is an ideal tool. If you’re using a particularly large camera, you’re probably better off with a tripod as opposed to a gimbal. At the end of the day, it all depends on what you’re trying to achieve visually.

A dolly is key for capturing smooth motion on-set, but in a different way than gimbals. For instance, a tripod dolly can take that stunning still imagery captured by a tripod and introduce fluid movement. A dolly has more limits, in some ways, than a gimbal.

With a gimbal, you can swing the camera around in any direction you’d like. With a dolly, you’re beholden to the directions in which the dolly tracks can take you.

Battery problems are some of the biggest on-set issues production crews discover. When you’re in charge of a production, it’s not exactly ideal to have the whole crew wait for an hour while the camera battery charges. It’s not good for productivity or professionalism. By bringing along extra batteries—not just camera batteries, but various battery types for video production equipment—you can bypass this issue completely.

Camera monitors are useful for many crew members, including cinematographers, actors, and directors. By combining monitors and digital cameras, a director can watch the images unfolding within the camera lens in real-time and in a larger format.

These bright bulbs encased in soft cloth are a must-have for sets. Unless your specific goal is to use natural lighting for your vision, you’ll need a set of soft boxes. By taking advantage of this lighting equipment, you have immense control over the footage’s visual presentation. That way, you’re not beholden to the natural lighting on set.

These lights can be attached right onto your camera for a full bright light in the center of your frame. These lights can often be seen when lighting news anchors out in the field, but they’re also utilized for larger productions. They are another useful tool for manipulating a given image to your advantage.

Ring lights are a great tool for glamorizing subjects in frame. They have a knack for combating unwanted shadows and creating an evenly lit subject. The light emitting from the ring-shaped bulb is also known for the unique way it becomes caught in the subject’s eye.

A lavalier mic is important for obtaining quality audio from actors on set. These small mics can be attached to an actors clothing to pick up audio directly from them. These mics are often associated with commonality among news anchors in-studio. However, the usefulness of these mics on bigger productions is immense and often unnoticed, aside from crew members who deal with it firsthand and know of that audio’s importance.

Don’t forget that when used on a boom pole, a shotgun mic will need the help of a shock mount to maintain audio integrity. Either way, this mic will help you achieve directional audio. That way, instead of recording every sound around your production, you can focus on the specific audio you need.

Having proper microphones is necessary, as is an audio mixer for those mics. A mixer is used on big productions where you need to monitor multiple audio channels. It’s also used to help alter or fix the audio on-set in real-time. That way, you can avoid sending out audio during a live broadcast that is broken. Additionally, if that audio does break, you can catch it immediately and solve the problem.

This audio asset isn’t for capturing quality audio for the production. However, an intercom system is important for crews to have on big sets to successfully maintain communication. When dealing with large-scale production crews, you must ensure these communication systems are on set.